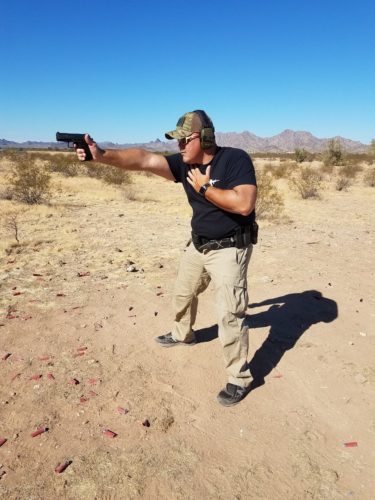 A week ago this country was once again rocked to its core by another school shooting in
Parkland, Florida. Seventeen beautiful lives lost to one deranged gunman, a young man and
former student whom I refuse to name as to not grant him any more notoriety. Now, there’s
been a lot of argument for gun control this, mental health that, expanded background checks
the other… The reality of the situation is that you cannot legislate evil; you cannot legislate
crazy anymore you can stop it from raining. What you can do, however, is make sure you’re
carrying an umbrella when it does start raining! And that’s what I want to talk about:
Preparedness.

Some people argue to not allow people under 21 to purchase a semi-automatic rifle.
Well, the Orlando nightclub shooter was over 21 so… Well, -they say- maybe if we restricted all
semi-automatic guns we’ll stop mass shootings, right? About that, think back to the sixties, at
Texas University. The shooter killed 14 people with a bolt-action rifle, the most ubiquitous of
guns. The effectiveness of the shooter is not so dependent on the gun as it is by his
determination and training. What most of these mass-shootings have in common is that almost
always, the shooter chose a “soft-target”.

To understand what a soft-target is, we must first understand the killer’s mentality. The
Colorado theater shooter had about four movie theaters to choose from in his area, one was
closest to his house. He didn’t choose that one. Only one of those four theaters had a “No Guns
Allowed” sign posted. Guess which theater he shot up? You see, mass-shooters want to make a
statement, many times, they want power. They will choose targets that have the minimum
probability of having someone being armed and able to stop their killing spree before they start
it. In 1974, after the Ma’alot school massacre by a Palestinian that left over 25 dead, Israel
didn’t make every school a gun free zone. They put armed guards along with armed and
trained teachers in their schools. They also implemented regular active shooter drills. There
have been two other shootings in Israeli schools after that and BOTH were quickly ended by
armed teachers. The Israelis got the right idea, if you ask me.

So how do we address this issue? Well, harden up schools by training school personnel
with firearms to a high level of proficiency and train them extensively in Active Shooter Tactics.
Said personnel could be teachers who volunteer for the program and/or additional personnel
such as Resource Officers. I hear the calls to put off-duty or retired law enforcement or military
veterans. I’m all up for it but they must be able to complete the specialized training. I know

many law enforcement officers and veterans that I wouldn’t want anywhere near me in a
gunfight. An Active Shooter scenario is a very dynamic and stressful scenario with kids and
innocents bystanders all around you, most panicked. You have to be able to observe and
process the scene extremely quick and while on the move and still be able to make the correct
decision in a split-second. The last thing you need is someone who’ll shoot at the first thing that
jumps out in front of him. I have witnessed this myself during our Active Shooter Tactics Course
and it isn’t pretty. The keyword here is: Training.

Look, we protect money with guns, we protect jewelry with guns, we even protect
politicians -much to my chagrin- with guns. Why can’t we protect our most precious resource,
our children, with guns? Every time a school shooting occurs, right behind the calls for gun-
control those of us that argue for better security just get shut down by school authorities. How
many more will it take until the so called “common sense” they love to tout about when talking
gun-control is used for a practical solution?

Why Pick This Particular Kind of Must-have Home Accessories