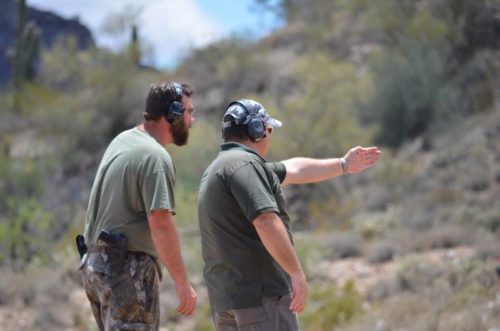 In my career as a firearms instructor (FI), I’ve had the opportunity to work with a wide variety of shooters. One subject that keeps popping up is that many students fail to address the totality of what being combat-ready really means. I don’t think many people realize that in order to have a complete skill set, one must work in many different types of skills. Most rely on just owning a weapon; many even do some firearms training and call it good. This gives the student a false sense of security and ignores that there are many other facets of one’s preparedness that must be addressed.

What does it mean to be a “gunfighter”? My fellow FI and friend G. Alvarez said once:

“There are two types of shooters: those who think putting holes on paper makes you a gunfighter and those that realize that marksmanship is only one piece of a much bigger puzzle.”

To that I will add that owning a gun makes you no more a gunfighter than owning a hammer makes you a carpenter. In ancient Japan the samurai trained on many weapons including the bow, spear and sword; but also, they trained in various forms of empty-handed arts. The purpose was not to be the primary tool of defense, but to be a tool in case the weapons were lost or broken. It ensured the warrior remained combat-effective even unarmed. The same holds true for the modern warrior, the “gunfighter”.

So what should we work on besides our “gun-fu”? Well, for starters and in all honesty, we must look at ourselves, our bodies. No one cares that you used to run a 6-minute mile in the Army, back in ’83 if today you get winded walking out to your mailbox. Then as part of your preparedness kit you include a 30 pound carrier vest with 20 7.62 cal magazines but if you had to sprint 20 yards to cover you’d probably pass out -you know who you are, admit it-. I get it, not everyone can be in Navy SEAL shape, but, at least lest try to get in the best shape we can. After all, in the words of Mark Rippetoe: “Strong people are harder to kill than weak people and more useful in general.” Cardio, weight training, agility and flexibility training, all of them extremely important in the quest for combat-readyness. Hit the gym!

Now, next item: What to do to bridge the gap between lethal and less-lethal force? Well, just like a good mechanic doesn’t just carry one tool in his toolbox, so must we. Not everything can or should be solved with a gun. This is a dangerous mentality I like to call “weapon-centric”; when all you have is a hammer, every problem looks like a nail. So what options do you have? Well, there are many intermediate force devices available, pepper spray, batons, kubotans, etc. Check the legalities in your area and above all, whatever you choose, practice with it. One thing that is almost universally legal: your hands and feet.

But, how do you choose an effective martial art? That’s the trick- you have to do your homework, lots of it. The rule of thumb is asking someone who has ample real-world martial experience. Then, go visit different martial arts schools. Avoid chains (aka McDojos) and avoid very rigid, traditional styles. Look for a dojo that trains their techniques force-on-force and also does hard sparring. Decide if you want to commit to a discipline for years to attain proficiency or if you just want one that’ll have you somewhat combat-effective in a few months -a caveat on the last one, there’s no fast track to good technique-. Once you find a school you think you like, stick with it and don’t quit.

There’s no easy path in the way of the warrior. Only if we are honest with ourselves and objectively look at our own training we will be able to pinpoint the areas that need work and address them. Keep adding tools to that skill-toolbox, don’t just become a collector of guns/training. Go out and practice! Remember, when things get ugly, the “combat fairy” is not going to come to tap you on the head.

Why Knowing Your Firearms Instructors Is Important